Tripawds Supporter sites have no ads!
Skip to content

Tripawds is a user-supported community. Thank you for your support!

Quinta is a 11-year old Labrador Retriever. He was recently diagnosed with hemangiosarcoma and histiocytic sarcoma, the latter giving rise to the need to amputate his front left leg.

We live in Tokyo, Japan. Quinta was born in Australia, but came to Japan to train as a guide dog with the Guide Dog and Service Dog Association of Japan. It quickly became apparent that his mellow personality was not quite suited to being a guide dog, so when Quinta turned 2 years old, I adopted him and we have been together since for nine years. He turned 11 in June. We live with three (also adopted — and rescued) cats: Ron (boy, age 12), Himeko (girl, age 3) and Jam (girl, age 1).

In May of this year, during an annual health exam, our vet detected abnormalities around Quinta’s spleen. Subsequent testing gave rise to suspicion of cancer, so in early June, Quinta underwent surgery for the removal of his spleen. He was diagnosed with hemangiosarcoma, although it appears that the cancer has not metastasized (so far). We are now considering whether to proceed with chemotherapy, and if so, what approach would work best.

Earlier this year, Quinta developed a limp on his front left leg. Several years ago, he tore the ligaments of both his back legs and went through surgery, so we initially suspected that the limp was caused by his over-reliance on his front legs to compensate for his weak back legs. Quinta then developed a swelling around his joints on his front left leg, which initially responded to medication. In late June, however, the swelling and the associated pain suddenly became worse. A biopsy revealed that Quinta was suffering from synovial sarcoma.

Quinta will be going in for surgery today. In Japan, there is not a lot of helpful information for people with “tripawd” dogs and there is strong social stigma attached to amputations generally. I am therefore very grateful for this site and all the valuable information I have been able to obtain through this site. I have already been able to locate a good harness for Quinta through the information on this site, and it will be waiting for him when he comes home.

I understand that in the US, dogs that go through amputation are typically released from the hospital fairly promptly. The practice generally in Japan is to keep the dog in the hospital for a bit longer for observations (this is also the case for humans that go through surgery), so I am told that Quinta will likely remain in the hospital for a few days. Fortunately, he is at an animal hospital that I trust completely (they have been treating Quinta ever since he arrived in Japan) and I know that he will get the best care possible.

I am now praying that Quinta’s surgery will go smoothly and that he will be released from the terrible pain in his joints. 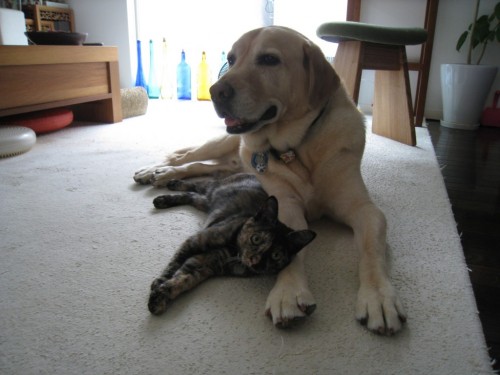 To remove ads from your site and others, upgrade to a Tripawds Supporter blog!

Add an excerpt to your posts to provide a summary for readers in many blog themes!

Tripawds is a user-supported community. Thank you for your support!

Welcome to Tripawds. Please read on for important tips. This is your first post. Edit or delete it, then start blogging.

Be sure to check out your default sidebars for helpful tips to make the most out of your new Tripawds Blog!

Don’t miss our helpful WordPress tutorial videos if you need help getting started with your new Tripawds blog.

Please publish a new post (or edit this one) to share your story. The Tripawds community is only notified of new blog posts in the Recent Posts widgets found throughout the News blog and discussion forum pages. Members will not be notified of any comments made on this default first post. You can also choose to edit or delete your sample page.

NOTE: If you edit this post, be sure to modify the “Published” date and change the post author to your username from the Author drop-down menu on the edit page. That way you will be notified of any comments you receive so you can approve them.

By default, any first comments made on your blog will require moderation in an effort to limit the amount of spam you receive. Be sure to “Spam” any inappropriate comments, and approve those from your readers. You can change your comment options from the Settings -> Discussion tab in your dashboard.

See the Help videos or post in the Tech Support forum with any questions.

By default your site will be indexed so Tripawds members will be notified of your update in the Recent Posts lists throughout this community. If you change your Privacy settings to discourage search engines, your posts will not be indexed! If for some reason you do not want your posts indexed, consider starting  forum topic to share your story and reply there with links whenever you publish new blog posts.

Thank you for sharing your story, and happy blogging!


Tripawds Supporter sites have no ads!